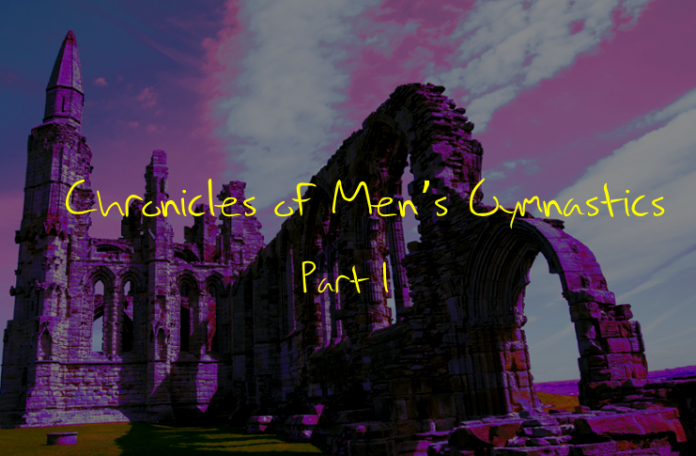 Most of us who watch gymnastics are in complete awe about what gymnasts are capable of. Their tumbling skills, air awareness, and level of strength in my opinion is what gives them their superhuman abilities. The general public will give credit to gymnasts all day, but that’s about it. Gymnastics in American culture is a fad that comes and goes, it’s very cool every 4 years, but then goes on a 3 year hibernation from the general public into a cave.

The 80’s, are known as the golden days for men’s gymnastics in American history. The 1984 Gold medal team is our American Gymnastics Dream Team. Bart Conner, Mitchell Gaylord, James Hartung, Scott Johnson, Peter Vidmar, and “Mr. Clutch”, Timothy Daggett made a statement on the Olympic stage with their historic performance. It was a great national pastime at the height of its popularity. Now let’s fast forward 33 years to this present day and you will notice that men’s gymnastics does not look or feel the same.

Remember back in the day watching old videos of Nadia Comaneci, Mary Lou Retton, and Dominique Dawes, you could determine their score range by counting the obvious deductions on 1 or 2 hands. This was a good time for fans of the sport. It was fairly easy to understand for everyone. Now a days, if you’re a gymnast or associated with gymnastics you get asked the question “What is a 13.5??” when talking to friends outside of the sport. The FIG decision to drop the 10.0 isn’t the sole reason for the decline in men’s gymnastics, but I sure do believe it was not a step in a positive direction for the gymnasts or fans of the sport.

For some time now, major sports around the world are becoming more statistical based to gain popularity and for better fan understanding. For example, the long ball in baseball, open offense in football, and more team shooting the 3 pointer in basketball. Where as with gymnastics, new rule changes took away all statistical comparison for past generations. Imagine a sport where it is literally impossible to compare stats across generations. The only stats that gymnastics has are national, world, and Olympic placement. Nothing else!! Imagine if baseball only had stats as how many world series a pitcher won, and how many games. Gymnastics missed out so badly to the trend of where sports were heading. It makes you wonder, what they were thinking about when deciding to go in a different direction with the rules. I can take a wild guess, it was never about growth or a lasting history that seems for sure.

We live in a sports world today where we are constantly arguing about who’s better Michael Jordan or LeBron James, Tom Brady or Joe Montana. And we can have these discussions about those athletes because we can dispute stats. Gymnastics has created rules and a structure that doesn’t allow fans the ability to follow great careers with statistical analysis that is easily understood. By doing this they created a sport that legends of the past can not be compared to one another which leaves little conversation about past greats. So essentially gymnastics created a world that doesn’t hold onto their past.

They created a world that every 4 years the history is rewritten. New rules that make statistical analysis beyond 4 years are irrelevant. Image this, if football made the field 5 yards longer every 4 years, or moved the hashed marks in every 4 years. Or Basketball added a 4 point shot one Olympic cycle then took it away the next cycle. That’s exactly what gymnastics did. They mistakenly took the drive to see harder gymnastics as growth of the sport, when in fact they were killing it. In doing so, they push the human body to their limit and made it almost impossible for a notable gymnasts to last beyond their mid 20’s. If other sports made choices about their sport so cavalierly they too would lose most of their casual fan base as well.

Every 4 years, the FIG keep changing rules for the sake of their own need to shake things up. The gymnastics community plays the short game with zero foresight past 4 years. I feel as a gymnastics fan we deserve better than the short sided views of the people at the top of the gymnastics community. We live in a time where every sport has debates over who is the “Greatest Of All Time”? We are left always saying the last Olympic champion because it’s obvious because gymnastics always gets harder so the most recent champion is generally the greatest ever. But don’t we as a fans of gymnastics deserve a better debate than that?