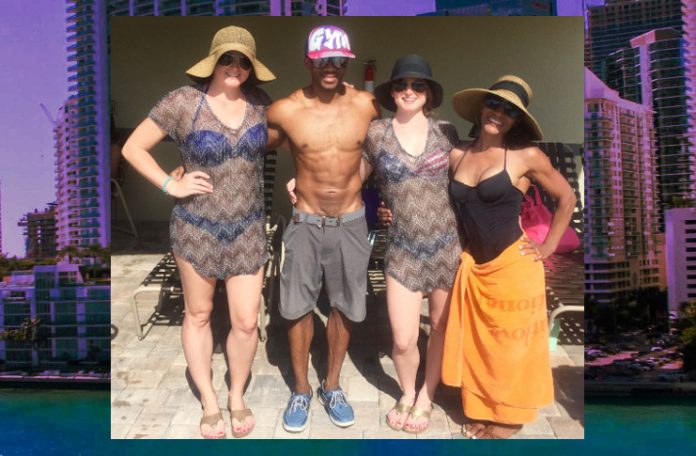 Midknight Robin and Remi Marvin talks with the Worley sisters, 2007 World Team Champion Shayla, 2007 MAC all-around champion Jolene, and nine-time All-American Melanie Sinclair about their experiences as elite gymnasts, performing with the circus, how to deal with setbacks in sports.

2013 (SENIOR): Earned NCAA second team All-America honors on beam … Named first team All-America on beam by the NACGC/W … Voted Southeast Region Gymnast of the Year … Competed on bars and beam in all 16 meets and performed 14 floor routines … Won seven beam titles and finished first on floor three times … Placed first on beam (9.925) and floor (9.95) at the NCAA Corvallis Regional … Won the SEC beam title with a 9.95 … Tied her career-high for the second consecutive week with a 9.95 on beam at NC State; added a 9.875 on bars … Tied her career-high on floor with a 9.95 vs. No. 7 Utah to finish first … Placed first on beam with a 9.9 at No. 5 LSU … Tied her career-high with a 9.95 on beam at Missouri … Scored a season-high 9.9 on bars vs. No. 1 Florida … Scored a then-season-best 9.9 as the floor anchor vs. No. 10 Stanford to give Georgia a 197 team total … Posted the team’s highest score on beam in 11 meets … Placed first on beam with a 9.9 at No. 12 Arkansas … Won beam with a 9.9 vs. No. 4 Oklahoma … Named Terry College of Business “Who’s Who” Among American Universities and Colleges … UGA’s female nominee for the H. Boyd McWhorter Postgraduate Scholarship … Named a Ramsey Scholar for Academic and Athletic Excellence … Named to SEC Academic Honor Roll … Named gymnastics team recipient of Scholar-Athlete Award … Recipient of the Suzanne Yoculan Award.

2012 (JUNIOR): Placed fifth on beam with a 9.95 in the NCAA Prelims, earning second team All-America honors … Second on the team with eight event titles, including seven on beam and one on bars … Recipient of team’s Scholar-Athlete Award … Tied for third on beam with a team-high 9.85 in the SEC Championship … Won the beam title against No. 21 NC State with a career-high tying 9.95 … Tied for first on beam with a 9.925 against No. 3 UCLA … Placed first on beam with a 9.9 vs. No. 3 Arkansas … Led the team with a 9.9 on beam and added a 9.825 on bars at No. 1 Utah … Had a team-high 9.85 on bars at No. 20 Auburn … Has posted the second-highest balance beam score in the nation so far this year with a career-high 9.95 at No. 2 Alabama … Also scored a 9.875 on bars against the Crimson Tide to tie for first and a 9.825 on floor … Led the team with a 9.875 in the anchor position on beam against No. 20 Denver … SEC Academic Honor RollNamed Scholastic All-America by the National Association of Collegiate Gymnastics Coaches/Women (NACGC/W).

2010 (FRESHMAN): … Competed in eight meets including the all-around twice … Won three titles including two in the all-around and one on floor … Was twice named SEC Freshman of the Week … Suffered an ankle injury vs. LSU and missed the final five meets of the season … Scored a season-best 9.850 on vault vs. No. 10 LSU … Scored a 9.900 on beam and a 9.825 on bars at No. 4 Florida … Claimed her second straight all-around title with a 39.375 vs. No. 3 Arkansas; scored 9.900 on floor and 9.875 on beam and was named SEC Freshman of the Week for the second straight week … In her first-career all-around, won the title with a 39.500 including season-high scores on beam (9.925) and floor (9.950) in addition to a 9.775 on vault and a 9.850 on bars vs. No. 11 Kentucky; was a late addition to the vault lineup. Was subsequently named SEC Freshman of the Week … Posted the meet’s fourth-highest bars score with a 9.825 and also competed on floor at No. 6 Utah … Scored a 9.825 on bars at No. 4 Alabama … Posted a 9.825 on beam vs. No. 7 Stanford … Named to SEC Freshman Honor Roll…Named Scholastic All-America by the National Association of Collegiate Gymnastics Coaches/Women (NACGC/W).

AS A FRESHMAN (2006) – Sat out 2006 season recovering from surgery to repair a torn right anterior cruciate ligament suffered in October at the 2005 Massilia Gym Cup in Marseilles, France… enrolled at UF in spring of 2006.

PRIOR TO FLORIDA – Five-time member of the U.S. Senior National Team (1999-00, 2001-05)… runner-up on vault and floor exercise in 2004 Pan American Event Specialist Championships… at 2005 America Cup, took second on vault and eighth in floor… second on bars and fourth on vault at 2004 World Cup in Ghent, Belgium… third on vault and beam plus fourth on bars at 2004 DTB World Cup in Cottbus, Germany… led U.S. to 2002 Junior Pan American Games gold medal, winning both bars and beam… competed in four continents as she represented the U.S. in several international competitions as a member of the national team… 12th in 2004 U.S. Olympic Team Trials all-around… fifth in uneven bars at 2005 U.S. Classic… sixth in all-around, third on bars and eighth on beam in 2002 U.S. Gymnastics Junior Division Championships… competed for Orlando Metro Gymnastics and coached by Jeff Wood and Christi Barineau

2006 (SOPHOMORE): She competed in all of the 2006 meets and in the all around in all but one…Finished second or better in the all round in seven of the nine meets, including three all-around championships…Won eight individual event titles in the ‘06 season (four on the bars, two on the beam and two on the floor)…Named the MAC Gymnast of the Week for the period ending March 5, after leading the Eagles to a tri-meet victory over Rutgers and Cornell, as well as a dual meet victory over Ursinus… Posted a career high 39.175 en route to second place finish in the all around at Kent State, the score is the third best in the school’s history…Turned in a 9.775 on the vault at Kent State , a 9.800 on the bars at Cornell, a 9.825 on the balance beam at Kent State and a 9.825 on the floor exercise against Western Michigan…

Prior To EMU:  Competed for Orlando Metro Gymnastics… Was the level nine National floor champion her sophomore year… Was a member of the two-time level ten state championship team…Was the Level 10 state floor champion her junior year as well as a three-time National qualifier…Member of the Team State championship in Level 10 in 2004…Attended William R. Boone High School, Was on the honor roll all four years and a member of the class council and Latin Club…